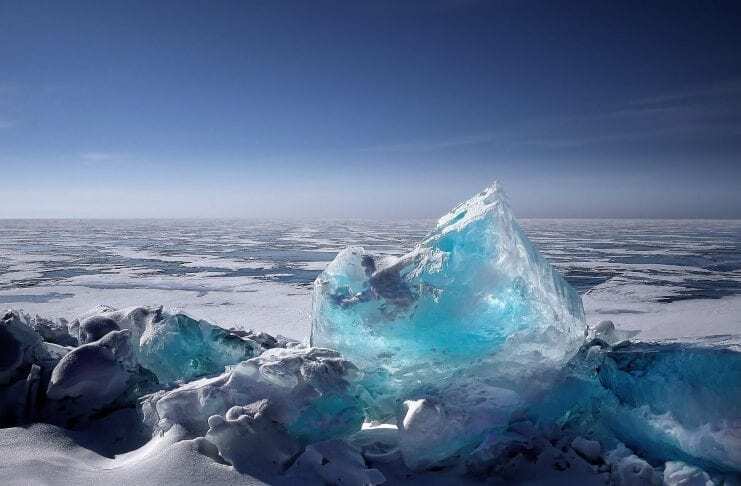 Study of giant viruses frozen in ice for a millenia

Giant viruses known as “Girus”, frozen in the permafrost from the remote landscapes of Siberia and the Antarctic is being studied by Michigan State University.

The researchers have shed light on these enigmatic, yet captivating giant microbes and key aspects of the process by which they infect cells.

“Giant viruses are gargantuan in size and complexity,” said principal investigator Kristin Parent, associate professor of Biochemistry and Molecular Biology at MSU. “The giant viruses recently discovered in Siberia retained the ability to infect after 30,000 years in permafrost.”

With the help of cutting-edge imaging technologies, this study developed a reliable model for studying giant viruses and is the first to identify and characterize several key proteins responsible for orchestrating infection.

Giant viruses are bigger than 300 nanometers in size and can survive for many millennia. For comparison, the rhinovirus — responsible for the common cold — is roughly 30 nanometers.

The outer shells — or capsids — are rugged and able to withstand harsh environments, protecting the viral genome inside. The capsids of the species analyzed in this study — mimivirus, Antarctica virus, Samba virus and the newly discovered Tupanviruses — are icosahedral, or shaped like a twenty-sided die.

These species have a unique mechanism for releasing their viral genome. A starfish-shaped seal sits atop one of the outer shell vertices. This unique vertex is known as the ‘stargate.’ During infection, the ‘starfish’ and ‘stargate’ open to release the viral genome.

During the study, several roadblocks needed to be addressed. “Giant viruses are difficult to image due to their size and previous studies relied on finding the ‘one-in-a-million’ virus in the correct state of infection,” Parent said.

To solve this issue, Parent’s graduate student Jason Schrad developed a novel method for mimicking infection stages. Using the university’s new Cryo-Electron Microscopy microscope and the university’s Scanning Electron Microscope, Parent’s group subjected various species to an array of harsh chemical and environmental treatments designed to simulate conditions a virus might experience during the infection process. “Cryo-EM allows us to study viruses and protein structures at the atomic level and to capture them in action,” Parent said. “Access to this technology is very important and the new microscope at MSU is opening new doors for research on campus.”

With this new data, Parent’s group designed a model to effectively and reliably mimic stages of infection for study. “This new model now allows scientists to mimic the stages reliably and with high frequency, opening the door for future study and dramatically simplifying any studies aimed at the virus,” Parent said.

The results yielded several novel findings. “We discovered that the starfish seal above the stargate portal slowly unzips while remaining attached to the capsid rather than simply releasing all at once,” Parent said. “Our description of a new giant virus genome release strategy signifies another paradigm shift in our understanding of virology.”

With the ability to consistently recreate various stages of infection, the researchers studied the proteins released by the virus during the first stage. Proteins act as workers, orchestrating the many biological processes required for a virus to infect and hijack a cell’s reproductive capabilities to make copies of itself.

“The results of this study help to assign putative — or assumed — roles to many proteins with previously unknown functions, highlighting the power of this new model,” Parent said. “We identified key proteins released during the initial stages of infection responsible for helping mediate the process and complete the viral takeover.”

As for future study? “The exact functions of many of these proteins and how they orchestrate giant virus infection are prime candidates for future study,” Parent said. “Many of the proteins we identified matched proteins that one would expect to be released during the initial stages of viral infections. This greatly supports our hypothesis that the in vitro stages generated in this study are reflective of those that occur in vivo.”

That many of the different giant virus types studied responded similarly in vitro leads the researchers to believe they all share common characteristics and likely similar proteins.

Whether giant viruses are capable of infecting humans ­- unlike the coronavirus ­- is an evolving topic of discussion amongst virologists.