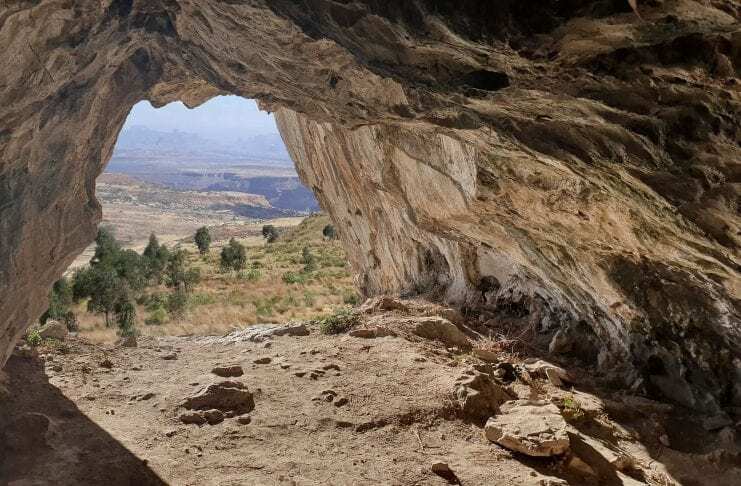 A lost world and extinct ecosystem for archaeologists

Archaeological sites on the far southern shores of South Africa hold the world’s richest records for the behavioral and cultural origins of our species.

At this location, scientists have discovered the earliest evidence for symbolic behavior, complex pyrotechnology, projectile weapons and the first use of foods from the sea.

The Arizona State University Institute of Human Origins (IHO) field study site of Pinnacle Point sits at the center of this record, both geographically and scientifically, having contributed much of the evidence for these milestones on the evolutionary road to being a modern human.

The scientists working on these sites, led by IHO Associate Director Curtis Marean, have always faced a dilemma in understanding the context of these evolutionary milestones — much of the landscape used by these ancient people is now submerged undersea and thus poorly known to us. Marean is a Foundation Professor with the ASU School of Human Evolution and Social Change and Honorary Professor with Nelson Mandela University in South Africa.

The archaeological records come from caves and rockshelters that now look out on to the sea, and in fact, walking to many of the sites today involves dodging high tides and waves. However, through most of the last 200,000 years, lowered sea levels during glacial phases, when the ice sucks up the water, exposed a vast plain. The coast was sometimes as much as 90 km distant! Our archaeological data shows that this was the prime foraging habitat for these early modern humans, and until recently, we knew nothing about.

That has now changed with the publication of 22 articles in a special issue of Quaternary Science Reviews titled “The Palaeo-Agulhas Plain: A lost world and extinct ecosystem.” About ten years ago, Marean began building a transdisciplinary international team to tackle the problem of building an ecology of this ancient landscape.

ASU, Nelson Mandela University, the University of Cape Town, and the University of California at Riverside anchored the research team. Funded primarily by a $1 million National Science Foundation grant to Marean, with significant funding and resources from the Hyde Family Foundations, the John Templeton Foundation, ASU, IHO, and XSEDE, they developed an entirely new way to reconstruct “paleoecologies” or ancient ecosystems.

This began with using the high-resolution South African regional climate model — running on U.S. and South African supercomputers — to simulate glacial climate conditions. The researchers used this climate output to drive a new vegetation model developed by project scientists to recreate the vegetation on this paleoscape.

They then used a wide variety of studies such as marine geophysics, deep-water diving for sample collection, isotopic studies of stalagmites and many other transdisciplinary avenues of research to validate and adjust this model output. They also created a human “agent-based model” through modern studies of human foraging of plants, animals, and seafoods, simulating how ancient people lived on this now extinct paleoscape.

“Pulling the threads of all this research into one special issue illustrates all of this science,” said Curtis Marean. “It represents a unique example of a truly transdisciplinary paleoscience effort, and a new model for going forward with our search to recreate the nature of past ecosystems. Importantly, our results help us understand why the archaeological records from these South African sites consistently reveal early and complex levels of human behavior and culture. T

The Palaeo-Agulhas Plain, when exposed, was a ‘Serengeti of the South”‘ positioned next to some of the richest coastlines in the world. This unique confluence of food from the land and sea cultivated the complex cultures revealed by the archaeology and provided safe harbor for humans during the glacial cycles that revealed that plain and made much of the rest of the world unwelcoming to human life.”

Mysterious 5,000-year-old owl-like plaques may have been ancient toys