Yggdrasil and the 9 Norse Worlds

In ancient Norse mythology and cosmology, Yggdrasil is an immense tree that sprang forth in the primordial void of Ginnungagap, unifying the 9 worlds of Asgard, Álfheimr/Ljósálfheimr, Niðavellir/Svartálfaheimr, Midgard (Earth), Jötunheimr/Útgarðr, Vanaheim, Niflheim, Muspelheim & Hel.

The branches of Yggdrasil reach far into the heavens, supported by three roots that extend to the well of Urðarbrunnr, the spring of Hvergelmir and the well of Mímisbrunnr.  The Norns, female entities who spin the threads of fate draw the waters from Urðarbrunnr which they pour over Yggdrasil.

The stags Dáinn, Dvalinn, Duneyrr and Duraþrór continually feed on the tree, but its vitality persists evergreen as it heals and nourishes the vibrant aggression of life.

On the topmost branch sits an eagle, the beating of its wings causes the winds in the world of men. At the foot of the tree dwells the great serpent Niðhǫggr, gnawing at the roots whilst the squirrel Ratatoskr journeys back and forth with insults and messages.

The existence of nine worlds around Yggdrasil is often mentioned in Old Norse sources, but the identity of the worlds is often exaggerated in interpretation by 13th century writers (Snorri Sturluson) and varies in description from one poet to another. 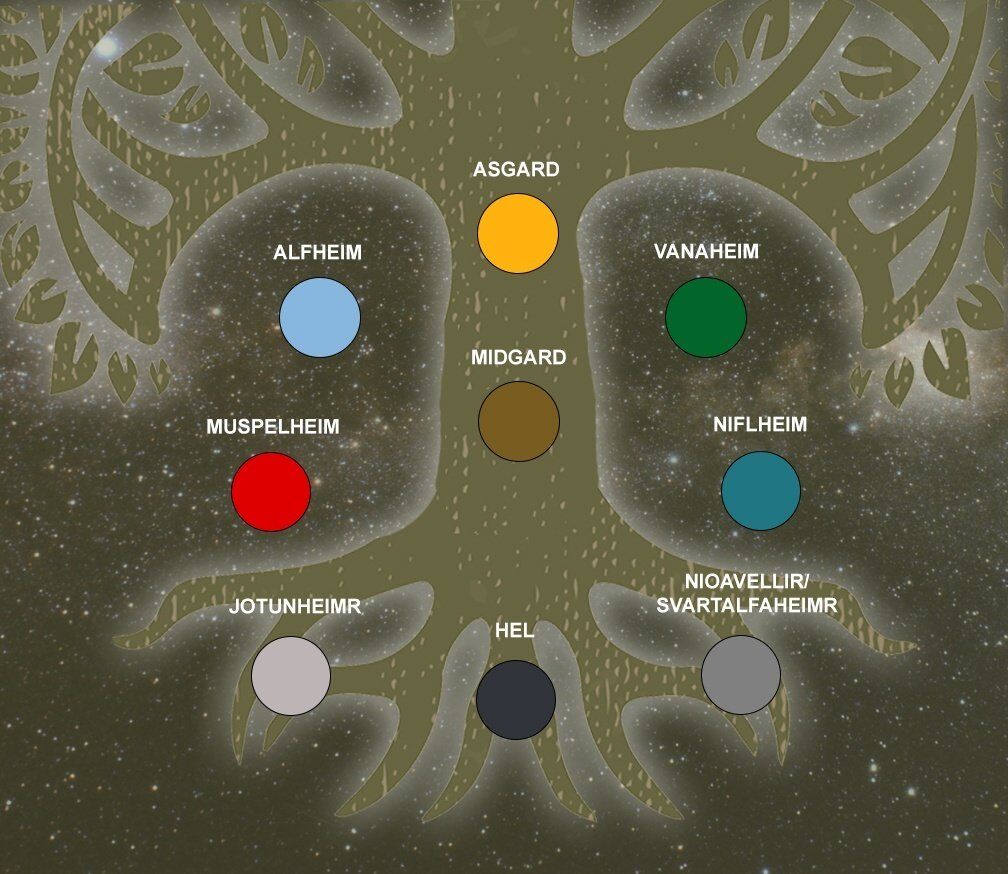 Asgard is the home of the Æsir, a ruling class of deities that includes Odin, Frigg and Thor. Snorri Sturluson writes that “Asgard is a land more fertile than any other, blessed also with a great abundance of gold and jewels.”

The world is surrounded by an incomplete wall, attributed to a stone mason that Thor struck down when the gods learned he was a Hrimthurs in disguise.

Asgard is also the location of Valhalla “hall of the slain”, an enormous feasting hall ruled over by Odin. In Valhalla, the dead join the masses of those who have died in combat known as “Einherjar” as they prepare to aid Odin during the events of Ragnarök.

Álfheim is loosely translated as “Land of the Elves” or “Elfland” and as the name suggests, is home of the Jósálfar light elves ruled by the Goddess Freya. Text describing Álfheim is scarce, but the elves themselves have been mentioned in poem as more “beautiful than the sun”.

Niðavellir translates as “new moon” or “the wane of the moon” and is the realm of the Dwarfs, a race of master smiths and craftsmen who reside underground working the mines and forges. (Text also associates the realm to that of the black/dark elves).

Midgard is a realm inhabited by a race known as humans, surrounded by an impassable ocean encircled by the great sea serpent Jörmungandr. The god’s of Asgard journey to Midgard via the Bifröst, a burning rainbow bridge that ends in heaven at Himinbjörg, the residence of the god Heimdallr.

According to the Eddas (Icelandic literary works), Midgard will be destroyed at Ragnarök, the battle at the end of the world. Jörmungandr will arise from the ocean, poisoning the land and sea with his venom and causing the sea to rear up and lash against the land. The final battle will take place on the plane of Vígríðr, where Midgard and almost all life on it will be destroyed and sink beneath the waves. In the aftermath, Midgard will rise again, fertile and green in a new creation cycle.

Jötunheimr is the homeland of the Jötnar, the giants in Norse mythology. In the Eddas the realm is described as having dark forests and mountain peaks where winter never eases its frosty grip. It was here in Jötunheimr that Odin sacrificed an eye in exchange for wisdom at the well of Mímisbrunnr.

Niflheim, translated as “Abode of Mist” or “Mist World” is a realm of primordial ice and one of the first to emanate out of Ginnungagap in the creation story of the Yggdrasil tree. The word “Niflheim” is only found in the works of Snorri and in the Hrafnagaldr Óðins.

Muspelheim is a realm of fire and was the first elemental world to emanate from the primordial void of Ginnungagap. The world is ruled by Surtr, a jötunn giant who plays a major role during the events of Ragnarök where the flames that he brings will engulf Midgard.

Hel, also referred to as “Helheim” or “The Realm of Hel” is an underworld for many of the dead, ruled by the deity “Hel”. Unlike the Christian form of hell, this Norse underworld is more a continuation of life elsewhere, neither a place of eternal bliss nor one of endless torment.

The food of the Vikings