As archaeologists, it was our duty to take on Cadbury over ads encouraging kids to dig up ‘treasure’ – and we won

Archaeologists have discovered a major Roman military road, and a canal near the city of Oosterhout in the Netherlands.
Read more
Archaeology

The latest online campaign by chocolate giant Cadbury encouraged children to go “treasure hunting” over Easter. Kids were encouraged to “uncover underwater shipwrecks in Devon” or “dig up Viking silver on the River Ribble”.

After discovering the website, archaeologists (ourselves included) launched a call to action, pointing out that such activities might well be breaking the law.

Several of the sites listed were protected monuments, where treasure hunting is illegal. Cadbury named Mooghaun Fort in Ireland, which is covered by very strict national laws, as one of its treasure hunting sites. Any excavation or use of metal detectors in Ireland requires a state-licensed archaeologist. Without one, fines can be enormous and lead to prison time. 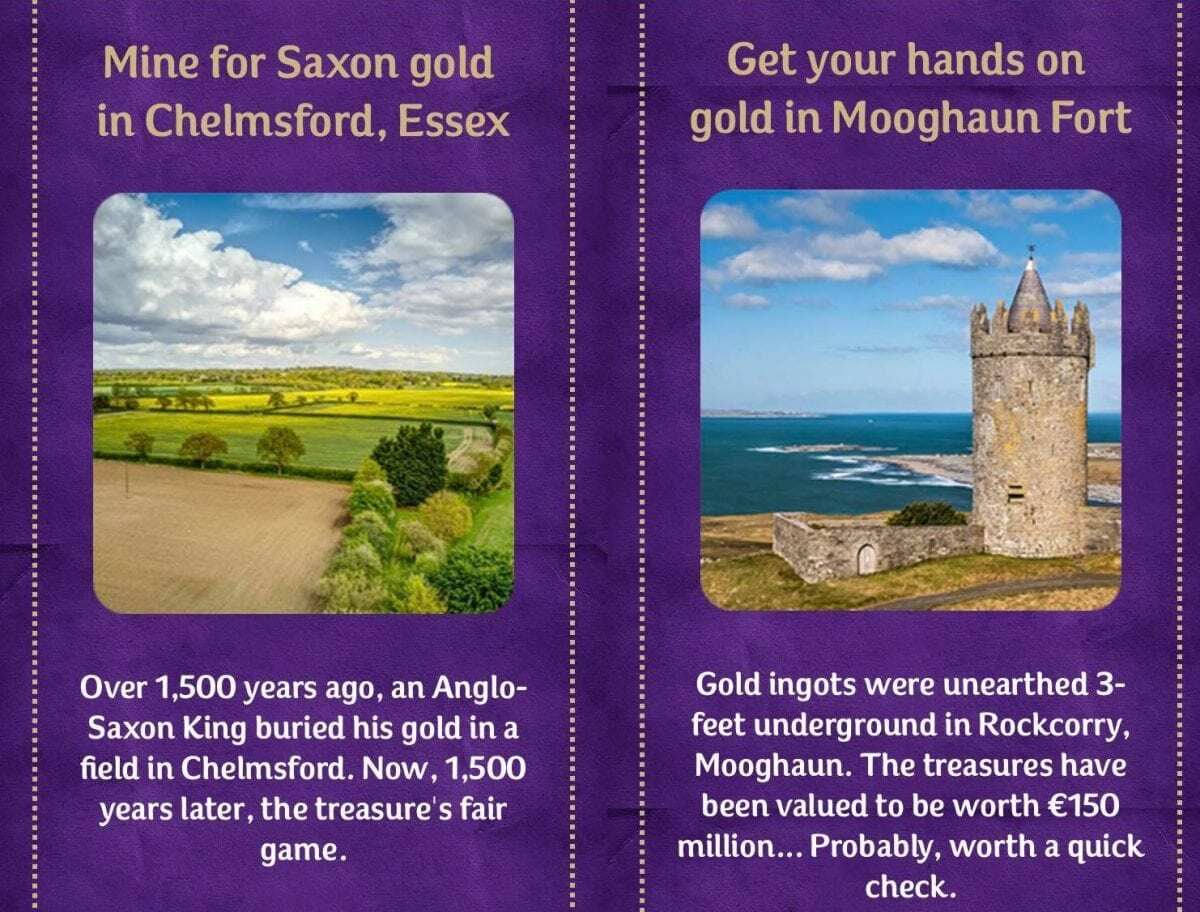 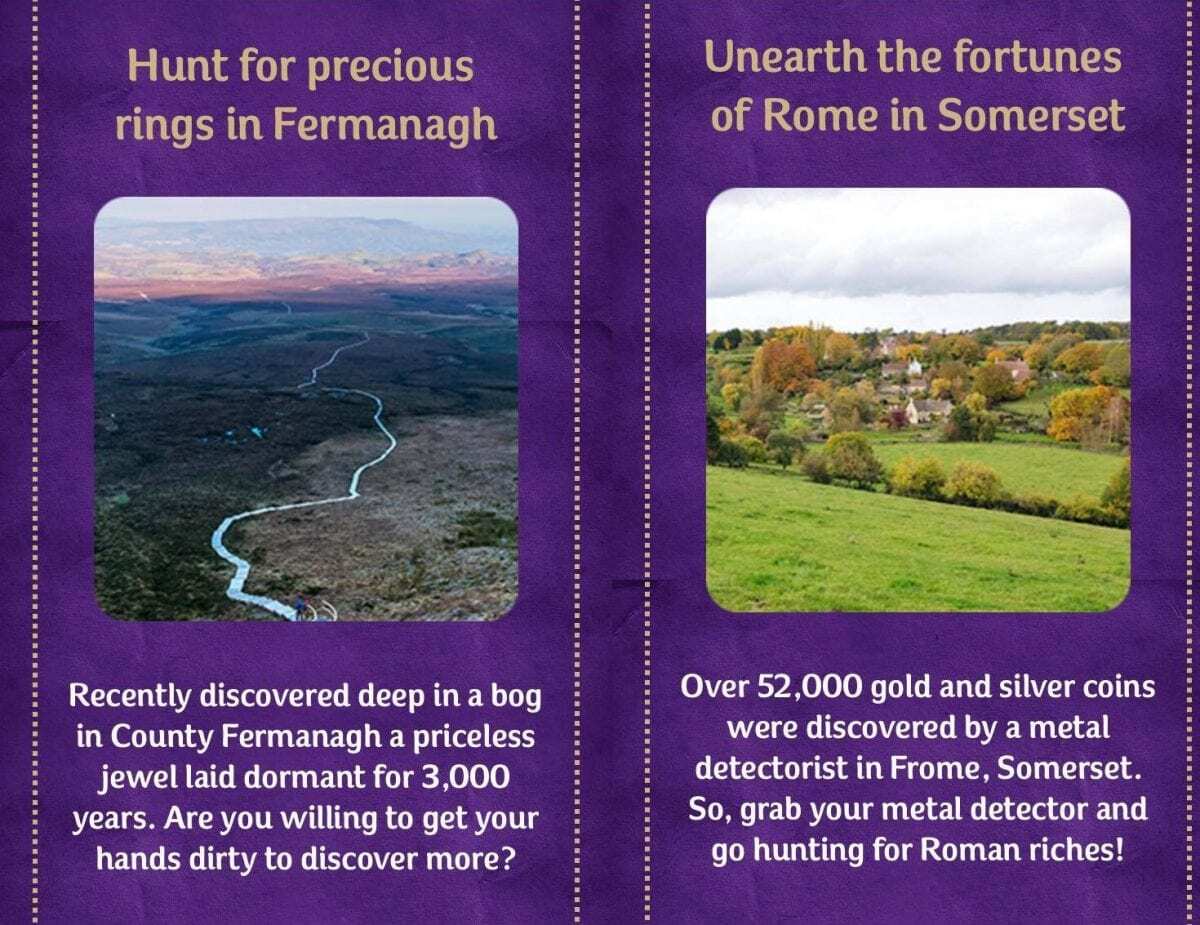 Cadbury removed their campaign website two days later. The company now promises to “focus solely on directing families to museums where existing treasures can be found”. So, thanks to the swift response from the heritage community, damage to sites was prevented – unlike a similar incident involving the company in the 1980s.

At that time, a Creme Egg treasure hunt led to members of the public digging up historic sites throughout the UK, in search of a scroll that would entitle them to one of 12 22-carat gold eggs. This treasure hunt was also cancelled, after the company received complaints from landowners.

Britain has probably the oldest and most liberal treasure hunting laws in the world. The common law of Treasure Trove goes back to late Saxon times. When objects of gold or silver were discovered, ownership fell to the Crown. In 1996, the Treasure Act placed the law on a more modern footing, redefining “treasure” to include prehistoric metalwork, coin hoards and objects made of gold and silver that are at least 300 years old.

People who find such artefacts have a responsibility to declare it to their local Finds Liaison Officers for review. If museums wish to acquire the treasure, a reward is split between the finder and the landowner. Of course, it is not permitted to hunt for treasure on the 20,000 archaeological sites that are protected ancient monuments.

In contrast, throughout much of Europe and the developing world, it’s illegal to use a metal detector for treasure hunting – and so is any form of unlicensed excavation. In Mediterranean countries such as Greece or Italy, where the landscape is bursting with buried sites, tomb robbers face significant criminal sanctions.

While stories in the media tell of amazing finds, metal detectors are more likely to turn up trivial pieces from the past, such as nails, buttons and ring-pulls. The depth that most detectors reach is seldom more than eight inches in freshly ploughed soil on farmers’ land – soil that would already be considered disturbed.

Yet the way these finds are distributed in the soil can offer clues about the location of new archaeological sites. Working with detectorists, archaeologists at Torksey, in Lincolnshire, were able to pinpoint the location of the Viking winter camp of 872, which led experts to massively increase their estimates of the size of the invasion army.

The Portable Antiquities Scheme records many detectorists’ finds, and makes them available to view on a public website. With over 3m photographs online, it’s a fascinating resource documenting the everyday objects of the past.

The UK’s ambiguous national attitude towards metal detecting and treasure hunting divides archaeologists. Responsible detectorists can be viewed as citizen scientists, helping to create a database of the nation’s rich buried heritage. Many already work together with archaeologists, and we encourage this community of enthusiasts and professionals – and the wider public – to make their voices heard in the current consultation on the Treasure Act to forge new definitions and guidance on how to explore our shared cultural heritage.

But treasure hunters who are driven by profit can strip objects of their cultural context and remove them into private collections forever. Even worse are “nighthawks”: an illegal fringe group who trespass private land in purposeful efforts to secretly loot archaeological sites.

One area of concern are detecting rallies, when a farmer may open up his fields for a day and invite all-comers to hunt for treasure. In spite of defined codes of conduct, hundreds of detectorists may descend on the landscape to be stripped of any finds, within a few hours, with little scope to record them or where they were found, while the objects disappear into people’s pockets.

There was a missed opportunity for Cadbury to work with archaeologists and engage with the UK’s ancient artefacts and sites as a wonderful cultural resource. The minister for arts, culture and heritage has called on the company to redress its transgressions, as have national organisations such as the Council for British Archaeology. In response, Cadbury said:

“It was not our intention to encourage anyone to break existing regulations regarding the discovery of new archaeological artefacts and we are grateful this matter has been brought to our attention.”

There are many opportunities for families to explore outdoor sites of historic and archaeological importance, without digging holes in the ground. The network of Young Archaeologists Clubs is a great place to start and join an enthusiastic community, who offer a hands-on approach to the past.

Professor in Archaeology, University of Bristol

New light into the recent evolution of the African rift valley

Researchers shed new light on the origins of modern humans

Archaeologists have discovered a major Roman military road, and a canal near the city of Oosterhout in the Netherlands.
Read more
Heritage

The Gladiatrix – The Roman gladiators that were women

The Gladiatrix were the female equivalent of the Roman Gladiator, that fought other Gladiatrix or wild animals during rare occurrences in arena games and festivals.
Read more
Biology

Archaeologists conducting excavations at the prehistoric settlement of Son Catlar, on the Spanish Balearic Island of Menorca have discovered a deposit of Roman military equipment and weapons, complete with surgical tools.
Read more
Travel

Archaeologists excavating the ancient port settlement and cemetery of Marea in Egypt have discovered a complex urban precinct.
Read more

Archaeologists have discovered a major Roman military road, and a canal near the city of Oosterhout in the Netherlands.
Read more
Heritage

The Gladiatrix – The Roman gladiators that were women

The Gladiatrix were the female equivalent of the Roman Gladiator, that fought other Gladiatrix or wild animals during rare occurrences in arena games and festivals.
Read more
Biology

Archaeologists conducting excavations at the prehistoric settlement of Son Catlar, on the Spanish Balearic Island of Menorca have discovered a deposit of Roman military equipment and weapons, complete with surgical tools.
Read more
Travel

Tzintzuntzan meaning “place of hummingbirds” was the capital of the Purépecha state (also called the Tarascan state), located adjacent to Lake Pátzcuaro in the municipality of Pátzcuaro, Michoacán, Mexico.
Read more
SOUTH AMERICA

Actun Tunichil Muknal – The Maya Cave of the Crystal Sepulchre

Actun Tunichil Muknal, which translates as “Cave of the Crystal Sepulcher”, is a Maya ceremonial cave site located near San Ignacio in the Cayo District of Belize.
Read more
Load more

The Roman conquest of Britain commenced in the year AD 43, but previously the Romans led two expeditionary campaigns almost a century earlier in 55 and 54 BC under the command of Gaius Julius Caesar.
Read more
Heritage

The Iron Ring of Castles, also called the Ring of Iron, is a chain of medieval fortresses constructed by King Edward I, otherwise known as Edward Longshanks, to subdue the native populations of North Wales.
Read more
EUROPE

Rochester Castle is an English castle on the banks of the River Medway in Rochester, England, that during the first Baron’s War was captured by baronial forces and stood against King John in a bloody siege.
Read more
Ancient Ruins

Sarmizegetusa Regia was the capital and political centre of the Dacians, located in the Orăştie Mountains of the Grădiștea Muncelului Natural Park, in present-day Romania.
Read more
Load more