From Hearing to Signing: What’s Happened While Libya Awaited Their MOU

The Arab Spring marked the beginning of a cultural crisis across the Middle East and North Africa (MENA). The looting and trafficking of cultural property became industrialised in countries like Libya, where antiquities were “gushing” out of the country at unparalleled rates.

The State Department has taken admirable steps to stem the flow of these illicit artifacts reaching the shores of the United States, home to the world’s largest art and antiquities market. Emergency restrictions on certain archaeological and ethnological materials from Libya were enacted on December 5, 2017.

These emergency restrictions emphasized the United States’ concern for the need to protect endangered Libyan cultural property. Two months after the implementation of these emergency restrictions, on February 23, 2018, Under Secretary of State for Public Diplomacy and Public Affairs, I. Steven Goldstein, and Libyan Ministry of Foreign Affairs Under Secretary for Political Affairs, Lutfi Almughrabi, signed a memorandum of understanding (MOU) between the Libya and the United States. This bilateral cultural agreement will restrict the market of trafficked antiquities in the United States. 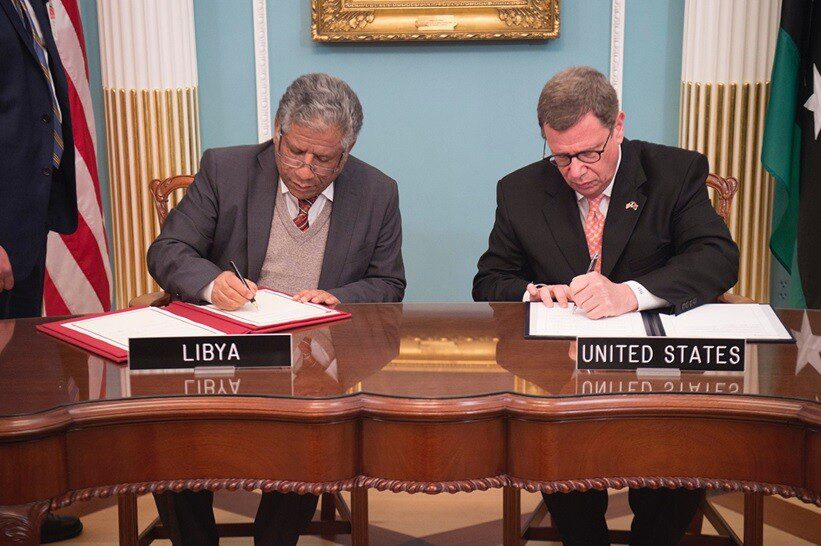 The bureaucratic process for this bilateral agreement began in June 2017 when the Department of State published notification that the Government of Libya submitted an official request seeking import restrictions on archaeological and ethnological material.

The hearing included a period of public commentary where individuals and organizations may submit comments on Libya’s submission in accordance with the four determinations considered by the Cultural Property Advisory Committee (CPAC). The CPAC met on July 19–20 and resolved to enter into an agreement with the Government of Libya to restrict the import of cultural materials.

Since the CPAC hearing, Libya has continued to experience threats to their cultural heritage while also taking new steps to protect it in the midst of conflict. In the months that transpired between the July 2017 hearing and the February 2018 MOU signing, Libya has faced continued crisis which has fostered ongoing pillage and destruction of their cultural property. Yet even during this period of turmoil, cultural experts, authorities, and even citizens have upheld efforts to protect their history. This is a look at what has happened with Libya’s heritage during that six months.

Lingering effects of clandestine Daesh (also known as ISIS) smuggling operations continue to be uncovered by Libyan officials. In late June 2017, the Libyan National Army (LNA) discovered artifacts from the Benghazi Museum in a Daesh stronghold. In October 2017, the Libyan Government expressed concerns over damage to the historic city of Sabratha “from the imminent danger of vandalism, and theft of its historical treasures because of armed clashes in the city and its surroundings.” As Daesh continues to operate surreptitiously in Libya, the nation’s culture remains under threats of pillaging and smuggling to finance criminal activities.

Police and other Libyan forces have continued to actively curb the trafficking of antiquities out of the country. Local police and special forces have recovered hundreds of artifacts, from Roman marble busts and statues awaiting transport in coastal houses, to hordes of silver coins being smuggled through Tripoli Mitiga International Airport. In late November 2017, Arabic media reported an “open online market for Libya” trafficking illicit antiquities. Artifacts range from Jewish manuscripts, to classical statues, and Ottoman era pieces – no period of Libya’s history is safe from traffickers while a market for this illicit material exists.

Intentional and unintentional civilian endeavors have unearthed antiquities in recent months and shed light on the efforts of Libya’s civil society to protect their heritage. On July 2, a diver returned five Roman-era artifacts to the antiquities office in Derna that he had found during a diving operation. Just a few weeks later, outside of Tobruk, a Libyan citizen discovered a collection of Ptolemaic/Roman-era carved stones at a previously unknown site and notified the Department of Antiquities. In September, two young locals handed over a number of priceless antiques they had acquired from a local merchant. Civilians are also rallying to assist tourist police to protect and preserve Leptis Magna, a UNESCO World Heritage Site. “We live here, we protect it,” said 60-year-old Ali Hrebish, one of the volunteers who keeps watch over the site, “for God and country.”

In the months since the CPAC hearing, a bevy of new initiatives have taken root in Libya for the protection of cultural heritage. Colleagues from the University of Durham have been training Libyan antiquities experts on survey and documentation of archaeological sites using methods like GIS and 3D imaging. In October, the Libyan Antiquities Authority (LAA) began an effort to document and protect archaeological sites in the remote desert village of Jaghbub; similar projects are now being carried-out across the country. In Benghazi, Libyan authorities are converting the damaged palace of King Idris into an archaeological museum.

In August, The Commissioner of the Ministry of Foreign Affairs and International Cooperation, Mohamed Eltaher Sayala, advocated for cooperation between all parties in the Libyan state to expedite the retrieval and protection of archaeological, historical, and cultural materials and demonstrate their provenience in Libya. After Spanish police seized 11 illicitly excavated artifacts from Shehat and Sousse, Dr. Hafez al-Waldeh remarked that the return of these pieces was a devastating blow to the gangs who are attempting to fund terrorist activity through the looting of cultural heritage.

Libya is making demonstrable strides in its efforts to protect the nation’s cultural heritage in the midst of an ongoing conflict, but there is still considerable ground to cover. In January 2018, Salafist Islamist groups renewed attacks on Sufi religious and cultural sites, systemic clandestine excavations continue to ravage cultural sites across the country.

While Libya is making great strides to protect its heritage, threats of looting remain during times of turmoil. Protecting a nation’s culture from becoming a commodity on the black market requires international cooperation. With the signing of the bilateral cultural agreement with Libya, the United States is taking steps to enhance that cooperation and ensure that the U.S. market for Libyan cultural property is closed to illicit material. While this is an important step toward protecting Libyan heritage, countries across the MENA region continue to face the same threats. Developing and enhancing regional and international cooperation is vital to ensure the preservation of cultural heritage across one of the most important archaeological regions on the planet.

Written by Katie A. Paul