Pembrokeshire is a county of Wales that is home to some of the most picturesque castles, historic monuments and ancient coastline found within the United Kingdom.

The Pembrokeshire Coastal Path is a 186 mile trail that forms part of the Wales Coast Path and is Britain’s only coastal national park. Reaching heights of 175m above sea level at Pen yr afr, on Cemaes Head, it hugs the coastal cliffs and connects hikers with towns such as Tenby, Solva, Newport and the city of St Davids. Remnants of Neolithic cromlechs and hut circles can be seen on the path, as can evidence of Bronze and Iron Age settlement. Notable geological features include; Lydstep Caverns, Church Doors Cove, The Cauldron and countless pristine beaches and inlets. 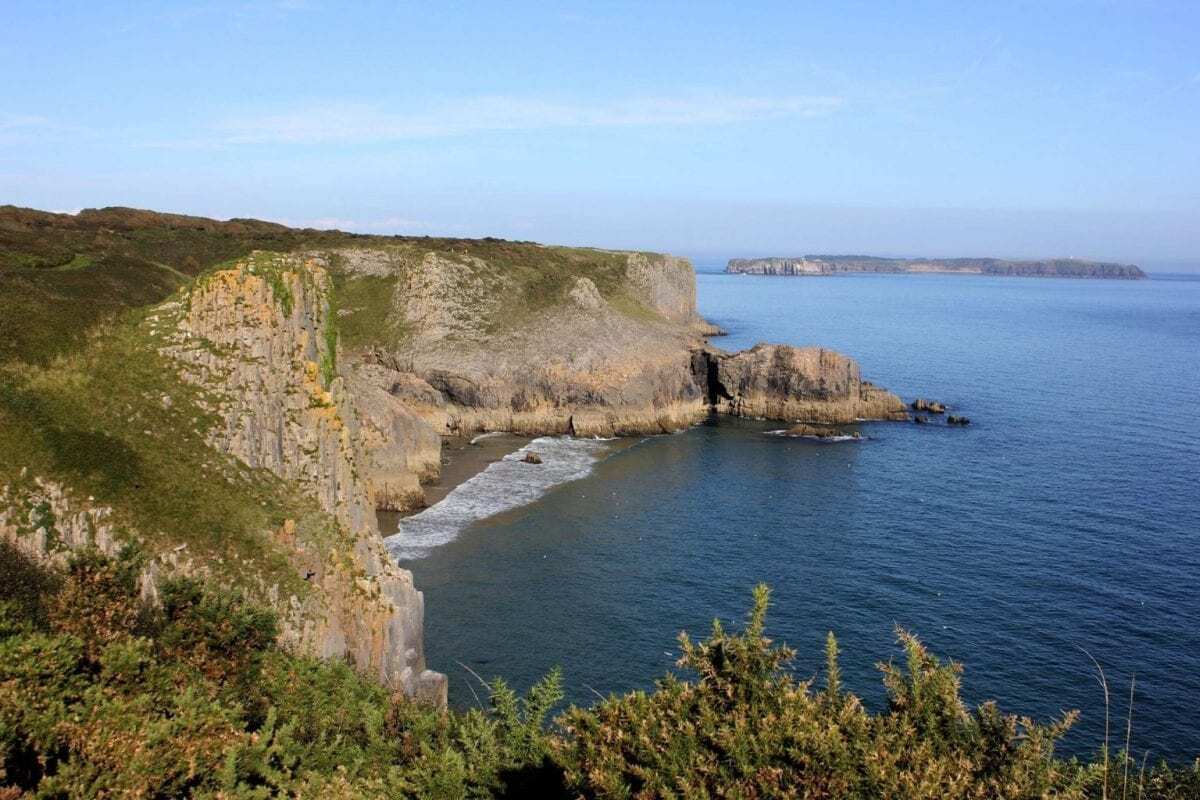 Carew Castle is a castle fortress that overlooks the Carew inlet in the tidal estuary of Milford Haven. Owned by the Carew family, the castle is a mixture of 11th-12th century Norman fortifications and Tudor features from the late 15th century. During the English Civil War, the castle was slighted by Parliamentarian forces to render the castle indefensible to Royalists. Adjacent to Carew Castle is a restored tidal mill and causeway that extends the length of the inlet. 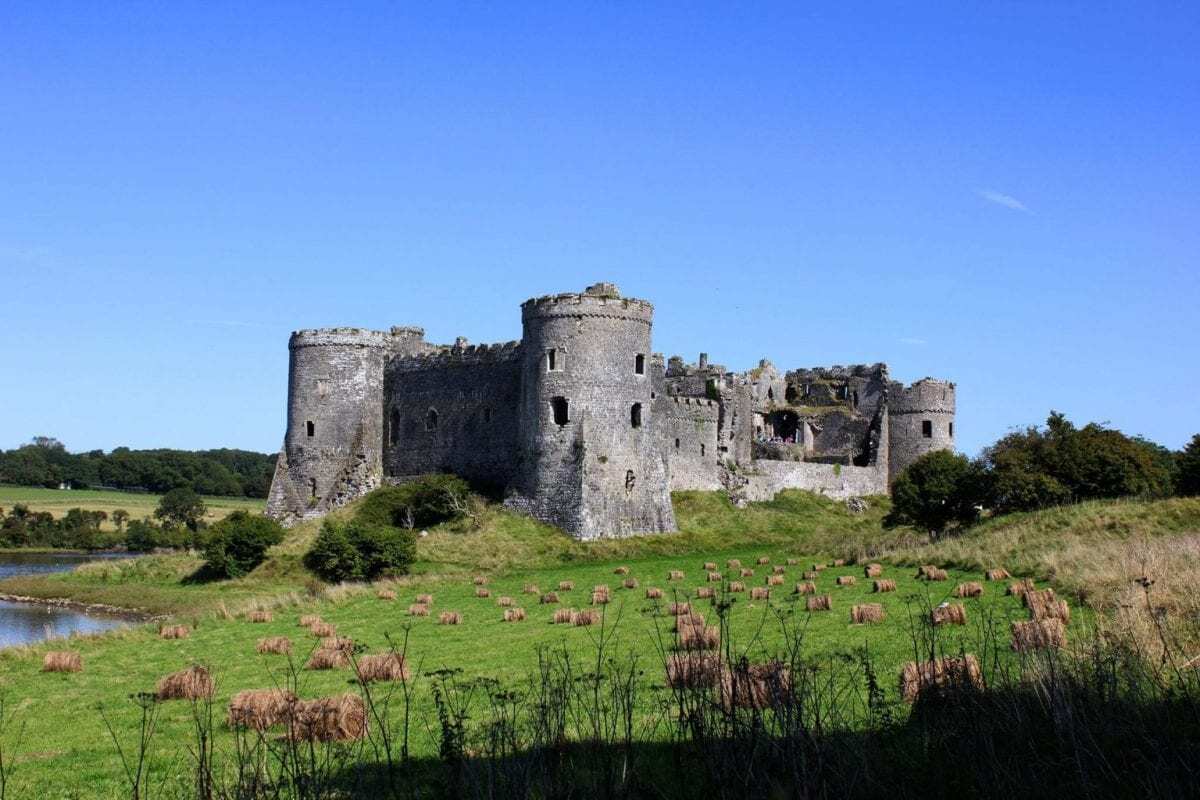 Pembroke Castle is a medieval castle that is sited on a strategic rocky promontory by the Milford Haven, and the Cleddau Estuary in the town of Pembroke. Founded in the 11th century after the Norman conquest of Wales, Pembroke Castle commands strategic views across the surrounding Welsh landscape from the impressive 23-metre-tall round keep. Beneath the castle, is a large limestone cave known as Wogan Cavern that is accessible from the castle bailey. 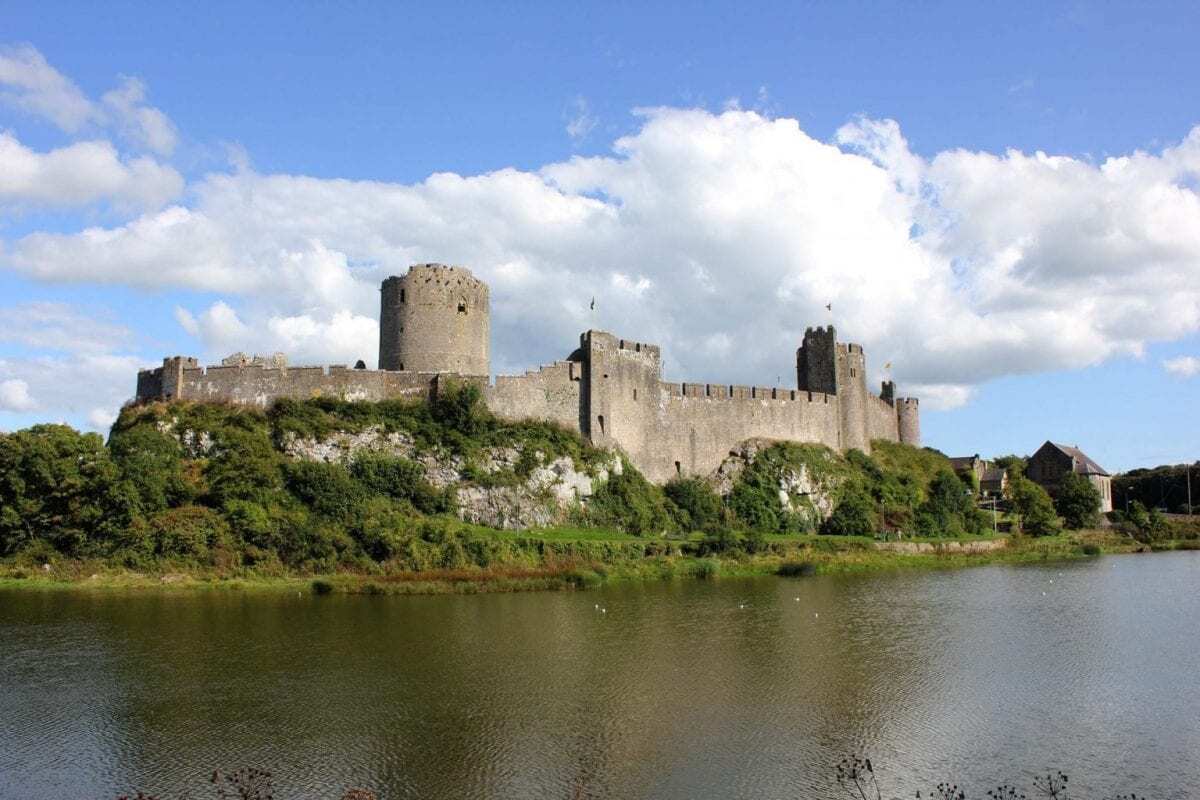 St Davids Cathedral & Bishop’s Palace are located in St Davids, Britain’s smallest city in terms of both size and population. St Davids is also the final resting place of Saint David, Wales’s patron saint, and is the de facto ecclesiastical capital of Wales. St David’s has been a sacred place for pilgrims, many of whom were nobles and kings that include William the Conqueror in 1077, Henry II in 1171, and Edward I and Queen Eleanor in 1284.

Caldey Island is one of the Holy Islands of Britain, with a recorded history over 1500 years. Accessed by boat from Tenby, the island is inhabited by Cistercian monks, known as Trappists.  The Caldey Abbey and monastery is one of the centres of Cistercian worship, with the current abbey having been built in 1910 by Benedictine monks. The island also contains the ruins of an early priory, stunning beaches and coastline, a lighthouse and a small industry manufacturing perfume and chocolate. 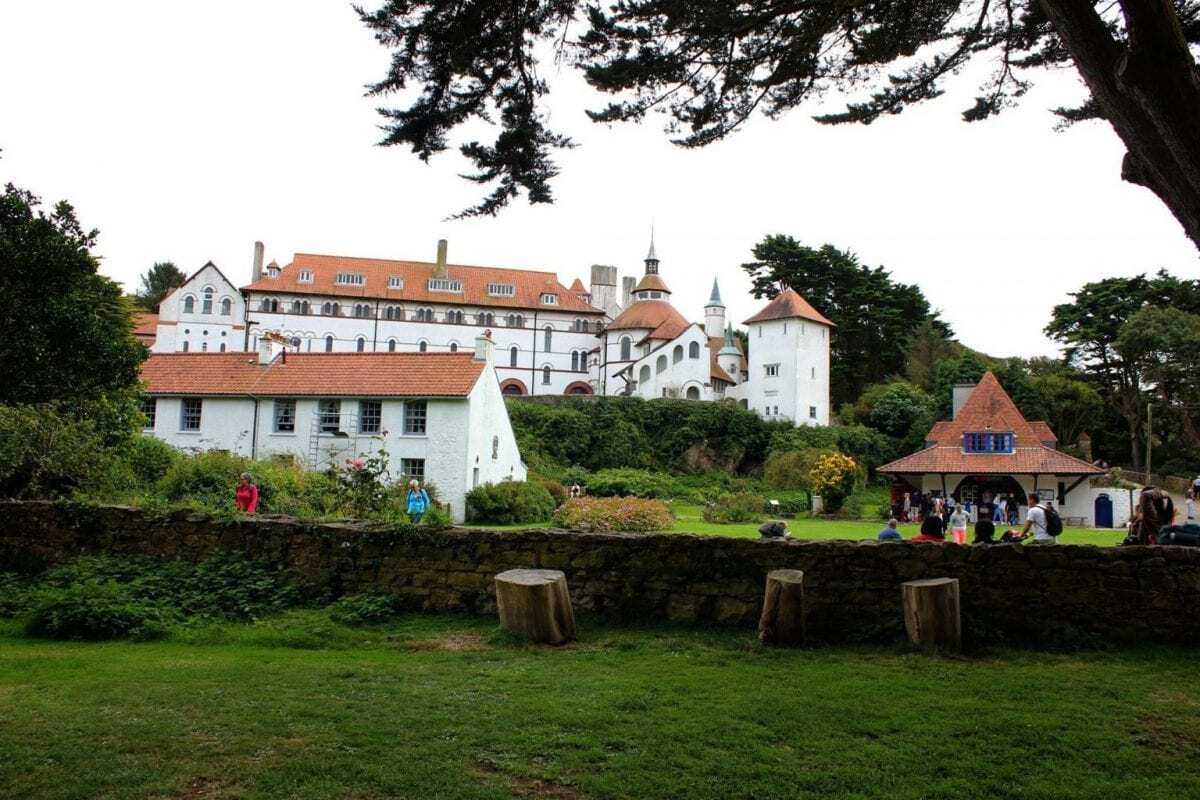 Cilgerran Castle is a 13th-century castle located next to the Afron Teifi River in Cilgerran, near Cardigan. The first castle on the site was thought to be built by Gerald of Windsor around 1110–1115, and it changed hands several times over the following century between English and Welsh forces. Although largely ruinous, two substantial drum towers have survived that offer impressive views of the surrounding landscape.

Lamphey Bishop’s Palace or Lamphey Palace is a ruined medieval building complex in Lamphey. Largely constructed under Bishop Henry de Gower, Bishop of St David’s (1328-1347), the palace was used by high-ranking clergy until the dissolution of the monasteries when church lands were seized by Henry VIII. 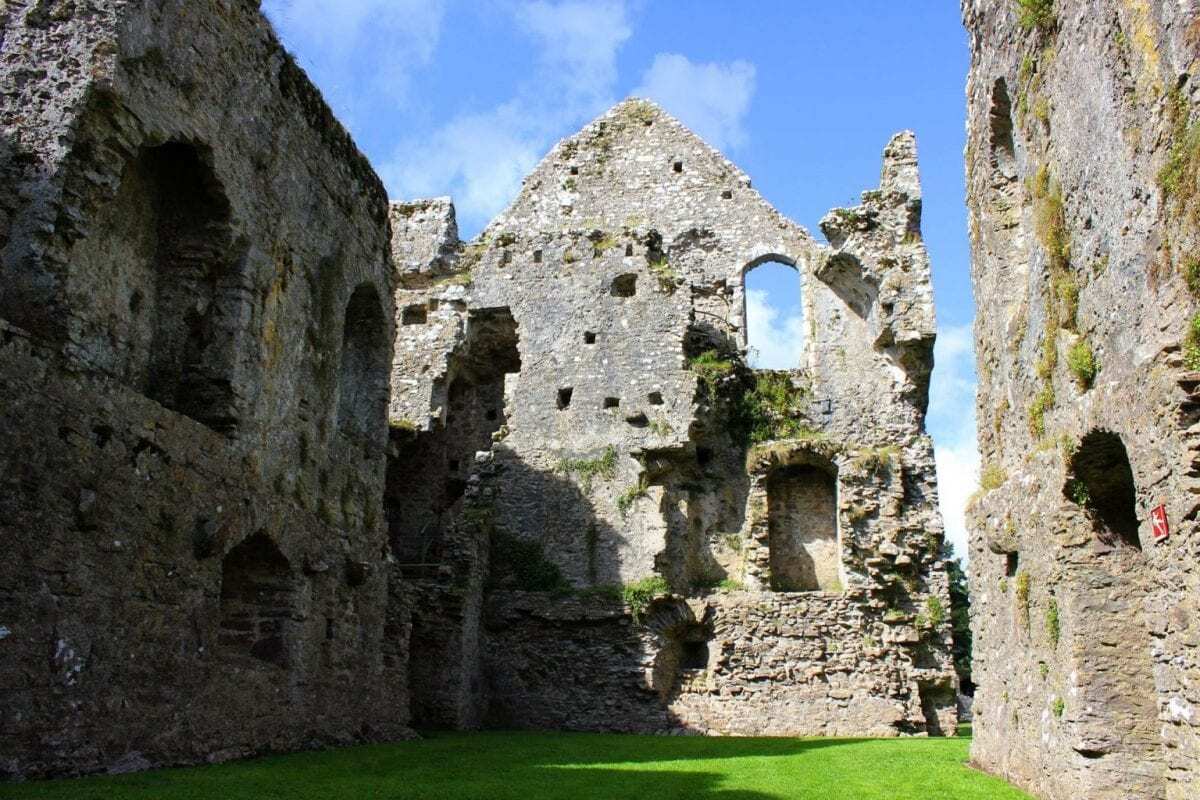 The Preseli Hills are located in the north of Pembrokeshire and stretch from Dinas Island, Cardigan Bay to Frenni Fach, near Crymych approximately 13 miles (20 km) to the east. The hills are a mix of moorland with areas of bog. Amongst the fifteen peaks, the hills are dotted with prehistoric remains and bluestone outcrops that were used in the construction of Stonehenge.

The South-Western coast of Wales is abundant with marine life and birds. Boat tours from St David’s can take you around the sanctuaries of Grassholm or Ramsey island where seals, dolphins and even whales are a common sight.

Manorbier Castle is a Norman castle located in the scenic village of Manorbier near Tenby. Founded in the late 11th century by the Anglo-Norman de Barry family, the castle is a rectangular enclosure castle. In 1146 Gerald of Wales, the great 12th century scholar known as Geraldus Cambrensis was born at the castle. 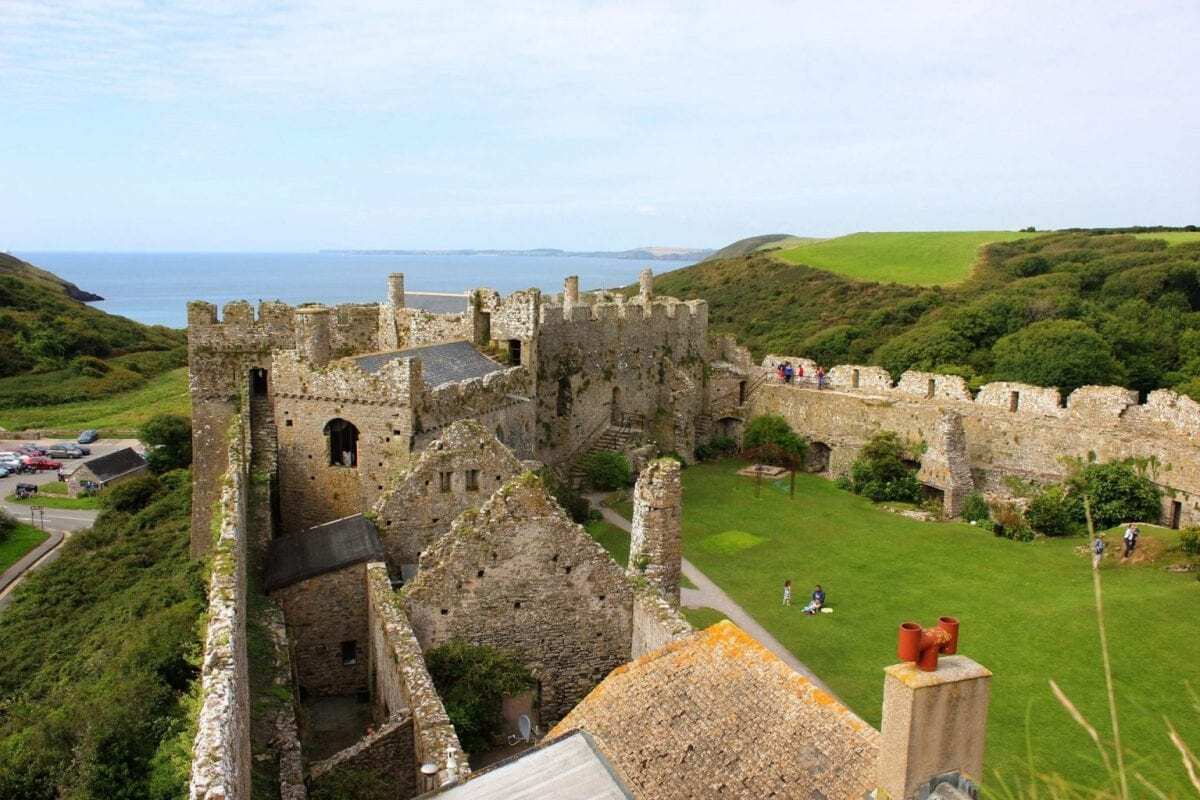 *listings are based on first hand experience of visiting each location

Fossilized wing gives clues about Labrador’s biodiversity during the Cretaceous

A fossilised insect wing discovered in an abandoned mine in Labrador has led palaeontologists from McGill University and the University of Gdańsk to identify a new hairy cicada species that lived around 100 million years ago.
Read more
Archaeology

Archaeologists from the Oriental Institute have discovered a lost ancient kingdom dating to 1400 B.C. to 600 B.C., which may have defeated Phrygia, the kingdom ruled by King Midas, in battle.
Read more
Tech & Engineering

Social media pages and accounts often turn into memorials when someone dies, giving people a chance to still feel connected to those they've lost.
Read more

Fossilized wing gives clues about Labrador’s biodiversity during the Cretaceous

Frozen bird turns out to be 46,000-year-old horned lark

HeritageDaily – is a leading science, research and publishing service that covers topics from across the scientific spectrum. Launched in 2011, we have grown to become one of the most recognised brands in archaeology and a major voice across the scientific community. We publish on past sciences, geo sciences and general science, with a core focus on the disciplines of archaeology, palaeontology and palaeoanthropology.