When you think of Northern Labrador, the images that come to mind for most people are of snow and ice covered rugged mountains, or Caribou or perhaps Polar Bears.

Few people would equate this place with World War II German Nazis. And yet in 1943 a U-Boat installed a German weather station code-named “Kurt” in Martin Bay, northern Labrador.

On September 18, 1943, U-537, commanded by Peter Schrewe, left Germany carrying a Wetter-Funkgerät Land weather station or WFL, codenamed “Kurt”. Also on board were meteorologist Dr. Kurt Sommermeyer, and his assistant, Walter Hildebrant. Nearly a month later on October 22 the U-boat glided into Martin Bay, Labrador. Shortly after arriving some of the crew and Dr. Sommermeyer were assembling the station ¼ mile inland.

There were 26 similar stations manufactured by Siemens. Fourteen were established in Arctic and sub-Arctic areas and five were placed around the Barents Sea. Two were supposed to be in North America but the U-Boat carrying the second was sunk.

Getting the station on shore would have been a difficult and dangerous task. It consisted of several measuring instruments, a telemetry system and a 150 watt Lorenz 150 FK-type transmitter. It also had 10 cylindrical canisters which were about 3 feet tall and weighed around 220 lb each. One canister contained the instruments and was attached to a 10-metre (33 ft) antenna mast. A second, shorter mast carried an anemometer and wind vane.

The other canisters contained nickel-cadmium batteries that powered the station. The WFL would broadcast weather readings every three hours during a two minute transmission on 3940 kHz. The system could work for up to six months, depending on the number of battery canisters. All of this material had to be carried from the U-Boat, put into rubber dinghies, rowed ashore and carried ¼ of a mile inshore to be installed at the station. This was all done in a little over 24 hours by hand and in October in northern Labrador, meaning most of it was done in near darkness.

After having the station assembled, Dr. Sommermeyer ensured that it was operating and U-537 departed Martin Bay. According to German records, the station operated for about 2 weeks. 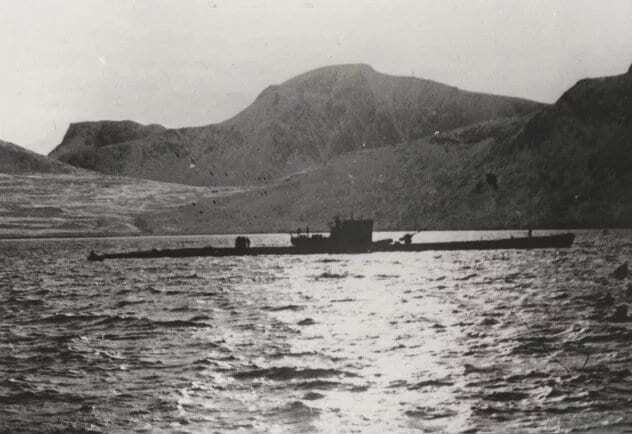 There is no record of the Canadian or American Military ever having become aware of the stations existence.

As far as we know, the first North Americans to find the site were part of the Torngat Archaeological Project in 1977. In terms of sites found and ground covered this two year project (1977-78), conducted by the Smithsonian Institution and Bryn Mawr College with the assistance of personnel from a number of American and Canadian institutions, was the most successful archaeology project in Provincial history. The project surveyed from Nain to the Button Islands and located nearly 350 archaeological sites and gathered data from many geological and botanical stations.

In 1977 Peter Johnson, a geomorphologist working with the project stumbled upon the German weather station but didn’t realize what he had found. He suspected it was a Canadian military installation. As part of the project the weather station was named Martin Bay 7 and issued Borden number JaDc-07.

At the time Douglas was the official historian for the Canadian Armed Forces. Selinger told Douglas that during his research he came across a reference to an automatic land weather station in Labrador. Eventually Selinger was able to locate the log book of the U-537 which confirmed that the U-Boat had indeed set up a weather station in northern Labrador.

With this information Douglas arranged a trip on a Canadian Coast Guard icebreaker to Martin Bay. Shortly after arriving in Martin Bay Douglas & Selinger located the remains of the station. What remained of the only German military operation on land in North America during the World War II was collected and eventually ended up on display in the Canadian War Museum.

The hidden chamber at Mount Rushmore

The hidden chamber at Mount Rushmore