Richard III and the Battle of Bosworth – By Mike Ingram

Andy Brockman, conflict archaeologist and editor of thePipeLine heritage news website, talks to author Mike Ingram about his new book which combines the latest archaeological research with a re-examination of  the English and French archive sources, in order to re-examine the bloody Battle of Bosworth.

The clash which saw the death of England’s most controversial King, Richard III, and the beginnings of Tudor England on an August afternoon in 1485.

Historian and author Mike Ingram is the Chair of the Northampton Battlefield Society and is also involved with the conservation of the English Civil Wars Battlefield of Naseby and many other local and national heritage issues, particularly with the charity which sets out to research, preserve and promote, Britain’s historic battlefields, the Battlefields Trust.

Recently we had a conversation by e-mail about his latest book, “Richard III and the Battle of Bosworth”, published by Hellion and Company as the first title in the publisher’s new series of military histories “from Retinue to Regiment 1453-1618”.

AB:  Let’s open with the easy question.  Given that military historians, like the great pioneer of the subject Sir Charles Oman,  have been writing about the Battle of Bosworth for over one hundred and fifty years, why write a new one?

MI:  When I wrote my first book on Bosworth back in 2011, I was very limited in the number of words I could use so I could only include a limited amount of detail.

At the same time, my research threw out many more questions, which, in my opinion, needed answering, such as what exactly was happening in Europe at the time and how crucial was the French involvement to the events leading up to the battle of Bosworth and its final outcome?

Other examples of questions I could not address then, but can in the new book, include, can we rely on the Tudor sources and what exactly was the involvement of the Stanley’s – were they really the great fence-sitters that they are portrayed as (that answer was touched upon in the first book)?

Another is why was Lord Hastings, who had been Richard’s supporter, suddenly arrested and executed in June 1483?

The commonly held belief that this was related to the disappearance of the ‘Princes in the Tower’ simply did not make sense. My new book, therefore, shows the results of my continuing search for answers to those questions.

It is also true that, over the years, particularly since the discovery of the actual battlefield, the narrative of the battle has evolved.

Most previous historians writing about Bosworth, including Oman, based their theories on the belief that the battle was fought on Ambion Hill and this affected how the contemporary sources were interpreted.

The discovery of the actual battlefield, two and a half miles [3.6km] south west of the traditional site, has shown that the contemporary sources must be interpreted in a different way to how they were interpreted previously.

Although the eventual outcome is the same, how that outcome was achieved can now be shown to be very different.

In addition, there has always been an emphasis on the battle being purely an English battle, however by examining European sources, it can be seen that Bosworth is part of a wider European war and the role of the French in the battle is critical not just to the victory of Henry Tudor, but helps to explain many events that happened in the lead up to it, such as the execution of William Lord Hastings.

None of this has been explored in any detail before.

AB:  When you were writing the book how aware were you of the vested interests in the Bosworth Battlefield, both those with an emotional investment such as some of the members of the Richard III Society, but also the economic investment and potential Bosworth and Richard III represent in the tourist offer of Leicestershire and the wider East Midlands?

MI:  When I was commissioned to write the book, I tried to close my mind to all the interests of others because, although I am generally pro Ricardian, I wanted to write the history in as neutral a way as possible and without any bias so that only the landscape and contemporary sources spoke.

In the same way, when I first developed my theories as to what happened in 1485 for my first book on the battle back in 2011, I refused to read any modern accounts and walked around the battlefield multiple times armed only with all the contemporary accounts and maps of the archaeology, until I understood how these two strands of evidence matched up with the actual landscape, which then revealed a new account of how the battle unfolded.

AB:  I think this book is also the first independent full-length study of the battle since the work of the Battlefields Trust, Glenn Foard and others actually relocated the battlefield site.

How has that work changed the understanding of how the battle was fought in a tactical sense?

MI:  The line of finds running parallel to Fenn Lane now shows exactly where the two armies fought, which in turn shows the geography of the battle.

The discovery of this and the location of the marsh, particularly in relation to the main battle line, allows greater understanding not only of the course of the battle but of the approximate location of Henry Tudor himself.

From there and by studying the landscape and sources it is relatively simple to identify William Stanley’s location, the likely route of Richard III’s final charge and his subsequent death.

There are also a number of other sources, such as the Ballad of Bosworth Fielde and the Song of Lady Bessiye, which did not make any sense when it was thought the battle was fought on Ambion Hill and were therefore discounted.

However, the relocation of the site shows that these same sources are now, for the most part, correct and they can now be used to give additional detail to the narrative.

Another interesting point that this also clearly shows that, whereas in the past, the Tudor writers have been generally been taken as read, by comparison to the European sources, it is possible to argue that the involvement of the French in the victory was almost entirely written out of the narrative.

AB:  You have taken great pains in the book to place the battle and those who fought it in their historical context down to a detailed discussion of the weapons armour and equipment used by both sides.

This is a long way from the Red Forces v Blue Forces school of military history and more like the six series of that Wars of the Roses tribute, “Game of Thrones” leading up to the final confrontation.  Why have you gone into so much detail? [And I know you are a fan of Game of Thrones].

MI:  Without the historical context the why and how the battle was fought cannot be fully appreciated.

In the same way, the “how” cannot be fully appreciated without an understanding of the tactical doctrines of the day and the weapons and armour available at the time.

Also, how these weapons were used, their strengths and weaknesses, as well as the similarities and differences between the weapons on both sides are critical to the fuller understanding of the decisions made by the commanders and even by the individual soldiers.

AB:  Obviously, your book benefits enormously from the archaeological work on the registered battlefield, but some of that work has come about because part of the site is going to be destroyed by the Horiba Mira test track for autonomous vehicles.

Do you fear for the future of our historic battlefields?  And, this is the “King for a Day” question; if you were the Culture Secretary in Whitehall in charge of telling Historic England and the other Government bodies which regulate activity on historic battlefields what would you tell them to do to conserve and promote these sites?

MI:  Yes, I fear for all our battlefields as it seems they are no longer considered important. As Culture Secretary I would make UK battlefields into National Parks, just like the Americans and Japanese.

I would also make sure that more British history is taught in schools. The success of Game of Thrones and Horrible Histories etc. shows there is an appetite.

If we are ever going to plan for the future we must first understand our past and take the lessons learned from it.

We must also preserve what little of our actual past remains and not let it be destroyed in the name of progress.

To truly understand a battle you must walk in the footsteps of those were there and a virtual reality version of our past will never replace the sense of place felt when standing on the spots where history was actually made!

Quite rightly, we have made much of World War One and Two battlefields and all those who lost their lives in far off fields in recent years. But here in England, many more lives were lost fighting for and defending democracy. Surely they are worth remembering too?

AB:  Finally, I get the sense that your book is in large part a product of the increasingly effective ability of archaeologists to do detailed forensic battlefield and landscape archaeology, and couple this with similarly powerful new techniques for discovering and interrogating primary sources and even experimental archaeology, particularly as regards the effectiveness of weapons.

Do you agree with that assessment and what advice would you give to archaeologists and historians about researching and telling these stories in future?

MI:  The book would not have been written without the combined work of the archaeologists and all the other disciplines involved in finding the actual battlefield.

A re-examination of all primary sources combined with an understanding of the historic landscape, the pattern and type of finds and the results of recent experimental archaeology (in this case, the study of the effectiveness and limitations of artillery) have allowed the new interpretation of events on the battlefield to be written.

Even the discovery of Richard III’s remains is important, as the analysis of his injuries give us an insight into the later part of the battle.

The advice is simple, preserve what little remains of our past and everyone needs to work together.

“Richard III and the Battlefield of Bosworth” is available now. 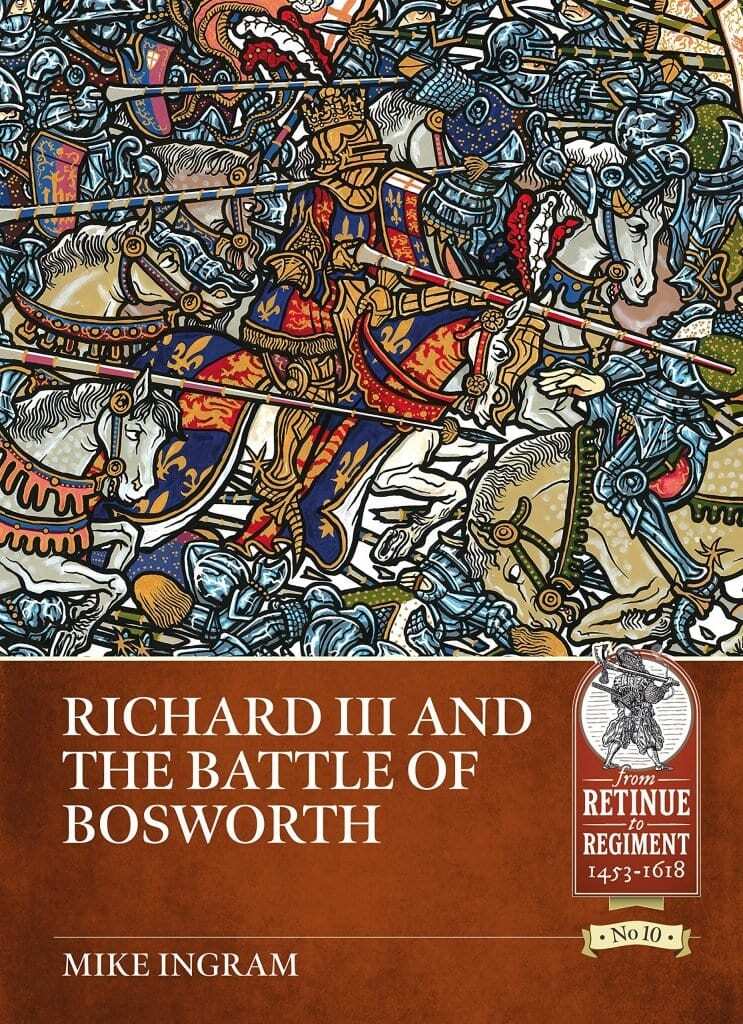 Previous article
ESO telescope reveals what could be the smallest dwarf planet yet in the solar system
Next article
Alongside Ötzi the Iceman: a bounty of ancient mosses and liverworts