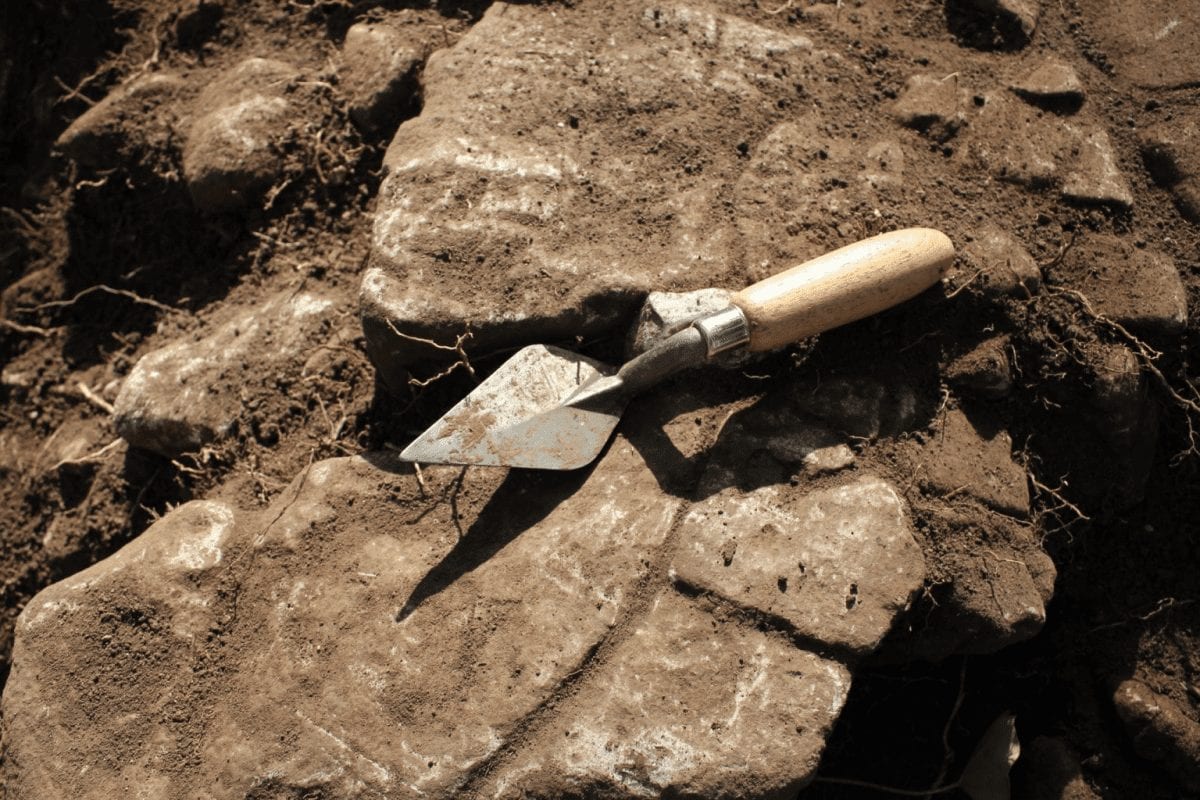 Scientists at work: Public archaeologists dig before the construction crews do

Armed with my sharpened trowel, 3-meter tape, shovel, shaker screen and peanut butter and jelly sandwich, I joined my first dig as part of Binghamton University’s Public Archaeology Facility back in 1975.

Crews of archaeologists were shovel testing the proposed route of Interstate 88 from Binghamton to Albany, New York. I was so excited at the prospect of discovering archaeological sites, and hoping one would become the basis for my master’s thesis.

After eight weeks wrapped up with no significant discoveries, panic set in – I would never finish my degree! Then, on an overcast and hot day, with a mass of mosquitoes swarming around my bandana-clad head, I descended with my crew into a glade adjacent to a pristine bog. I rammed my shovel into the ground, poured the soil into the shaker screen and heard what sounded like coins hitting the metal mesh. It was hundreds of pieces of chert debitage, the flake by-products of stone tool manufacturing. I had discovered my first prehistoric site. Our whole team was elated, and I had my thesis topic.

Fast-forward to now: I’m the director of the Public Archaeology Facility, a research center specializing in cultural resource management. Our mission is to identify, evaluate and preserve significant sites, train students to be professional archaeologists and share our results with the public. We can work on up to 100 projects a year. Since our inception in 1972, the center has discovered more than 3,500 archaeological sites.

Back when my 10-year-old self announced to my parents that I wanted to be an archaeologist, I was met with incomprehension and a little fear – what kind of career prospect was that? But thanks to the 1966 National Historic Preservation Act, federal agencies must consider the impact of construction and development projects on significant cultural resources, and take measures to avoid those impacts. Developers with federal funding or permits hire legions of cultural resource management archaeologists to help them satisfy the law’s requirements.

People often ask how cultural resource management differs from traditional archaeology. There’s quite a bit of overlap. Academic archaeologists train with mentors, specialize in a cultural region either in the United States or abroad and participate in grant-funded research. They pick the places where they work.

Cultural resource management archaeologists do not pick the places where we dig. Instead, we conduct archaeology in spots where developments or other ground-disturbing projects are planned. We never know where our next project will be. We could be on a nearby bridge replacement project one day checking for sites, travel 50 miles the next day to excavate a 5,000-year-old camp where a housing development is proposed, finish the week with client meetings, then head out the next week to an urban excavation of a 19th-century neighborhood.

Traditional archaeology usually tests a theory or method, or tries to replicate previous scientific findings. A cultural resource management investigation needs to answer questions like: Will this construction project damage or destroy a significant part of our nation’s heritage? This heritage can take the form of archaeological sites hidden below ground, above-ground historic architectural gems and landscapes that hold special religious or ceremonial significance to Native Americans and other communities.

And this isn’t just a small offshoot of mainstream archaeology. For instance, in 2013, more than 102,000 federal undertakings required some form of compliance with the National Historic Preservation Act. This doesn’t include the thousands of state-permitted projects that fall under the jurisdiction of state historic preservation laws. That year more than 135,000 cultural resources were discovered and evaluated for their historical significance as part of federal projects alone. Each of these sites or properties represents new knowledge about how people lived, worked and viewed their world hundreds and thousands of years ago.

Finding objects from past cultures

Even though the origins of our projects are different, cultural resource management archaeologists make exciting discoveries just like our colleagues. For instance, the sites we found during that I-88 project (which I wove into my doctoral dissertation) showed us how seasonally nomadic hunter-gatherers from thousands of years ago lived in communities, moved across the landscape and used a changing assortment of stone tools for their everyday tasks. I-88 data continue to produce new knowledge even 40 years after my first dig; I’ve just published a new article on some of the sites.

Cultural resource management archaeology does not guarantee that you will make discoveries all the time. Probably less than half the projects we survey will locate a site. That’s not a bad thing. After all, modern developments need to happen, and it is best that they are built where there are no significant sites.

But when you do make a discovery, you can almost feel the presence of people who lived here and called this place home thousands of years ago. There is a sense of humility in being allowed to meet the ancient ones through the artifacts they left behind, and this gift needs to be treated with respect. Cultural resource management archaeologists are tasked with finding ways to preserve the sites we find by working with developers and agency officials to see if there are ways to redesign a project to go around the site, thus leaving it undisturbed.

For instance, a proposed commercial development on the Chenango River near Binghamton, New York led to our finding a rare, information-rich camp with scores of stone bowl fragments and cooking hearths. We worked with a cooperative developer and the town board to shorten the width of proposed parking spaces. They also repositioned planned “green space” to allow for preservation of parts of the site. A nice balance resulted – the development moved forward and the site is preserved for future research.

Skills of a Ph.D. and an MBA

My job today is less about digging than it is about working with people in the present to build an understanding of the people who created the sites we find.

My academic knowledge is essential to my professional life; I could not analyze and interpret what I find within meaningful contexts without it. But I also needed experience in business management, negotiation, diplomacy and the ability to share our discoveries with the communities in which we work.

Much of my job today involves working with Native American Nations. I was fortunate to have a Native American chief mentor me in how to build mutual respect with First Nation peoples. What started as a conflict over a natural hill with no artifacts turned into a lifelong lesson on sacred places that are invisible to an untrained person. Once I realized that the past is not just about objects but about people (then and now), a whole new picture of heritage archaeology emerged for me.

I assist clients and federal or state agencies in complying with laws requiring that the descendants of the ancient peoples who created sites be involved in decisions about the preservation of sites in jeopardy of being destroyed. There is satisfaction in knowing that you can not only make discoveries that yield new knowledge, but that you have the ability to help protect these sites and share the reasons why preservation is important.

Cultural resources are fragile nonrenewable resources. Once they are destroyed, they cannot be recreated. This is not only a loss for our nation’s heritage but a more personal loss for the living descendants of these past peoples. Cultural resource management is a specialized industry that employs thousands of archaeologists who are not just diggers but interpreters and preservation experts. The discoveries we make are windows through which we view the people who came before us. It’s our responsibility to respect that heritage and the people who are connected to the sites we discover.

Previous articleResearch highlights how glass was a ‘symbol of power’ to ancient cultures
Next articleCheating, bribery and scandal: how the ancient Greeks did the Olympic Games