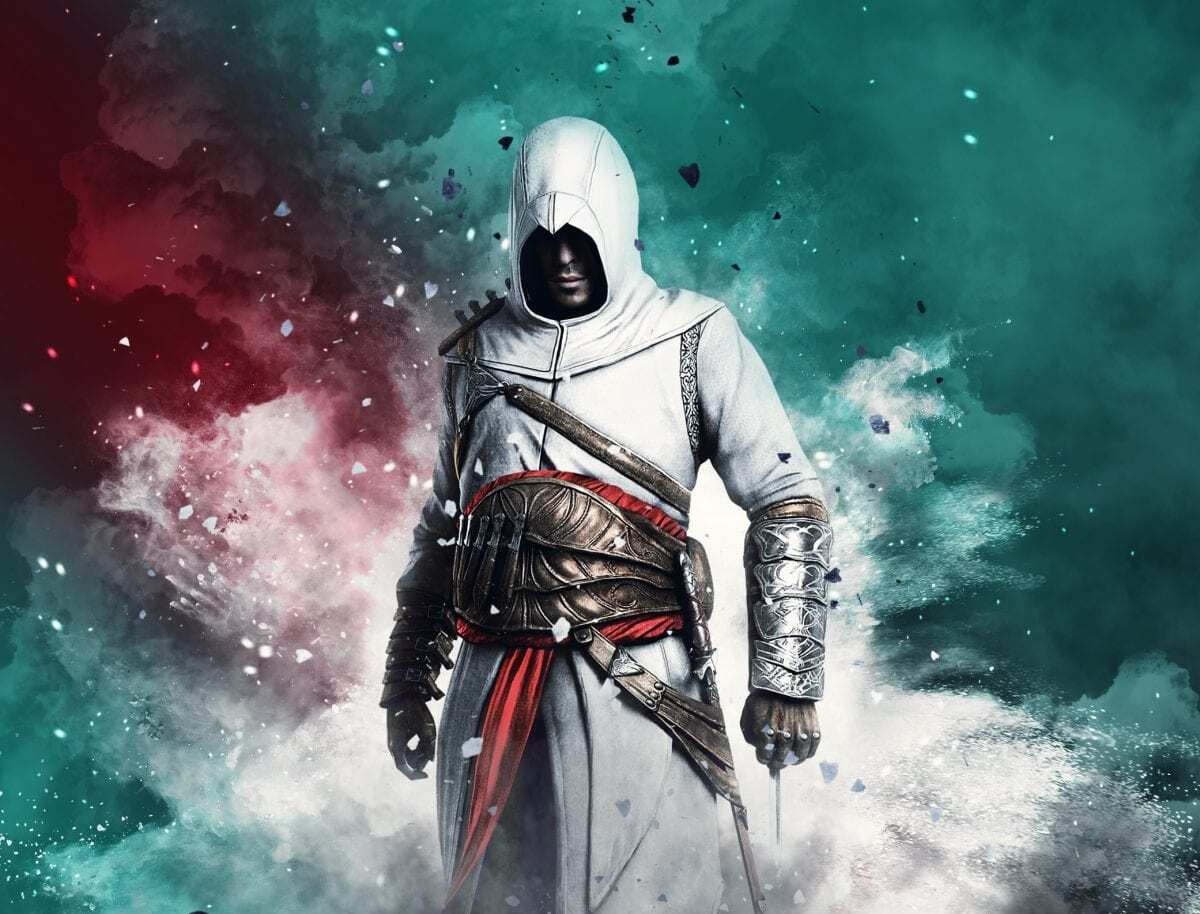 The word “Assassin” is a term that was used to describe a fedayeen group within the Nizari Ismailis State, that formed when followers of Nizarism split within an Ismailism branch of Shia Islam.

The true origins of the word have been debated for centuries among historians and scholars, with one such theory believing that “assassin” has roots in “hashshāshīn” – meaning hashish smokers/users.

The first known use of the term “hashshāshīn” has been traced back to AD 1122, when the Fatimid caliph al-Āmir used it to mean a derogatory reference to the Syrian branch of the Nizaris Ismailis.

The spread of the term was further facilitated through encounters with European Crusaders, whose historians and chroniclers further disseminated it across Europe, telling lurid stories about a warlike sect, hidden away in remote mountain fortresses.

The Nizari Ismailis State was founded by Hassan-I Sabbah. Hassan was born around AD 1050 into a family of Twelver Shī‘ah in the city of Qom, Iran. Early in life, Hassan developed a keen interest in metaphysical matters and academia, studying palmistry, languages, philosophy, astronomy, and mathematics.

Much of Hassan’s life is speculation or written by third party sources, but the biographer Rashid-al-Din Hamadani records Hassan’s arrival in Egypt to study as a missionary on the 30th of August in AD 1078.

Hassan toured extensively throughout Persia, debating with religious leaders his teachings and doctrine. His travels reached as far as the shores of the Caspian Sea and the mountains of Alborz in the Rudbar region, where he searched for a base from which to guide his mission.

Around AD 1090, Hassan and his followers took the castle of Alamut using an elaborate strategy of infiltration. Now with an established foothold in the region, he extended his influence by conquering strongholds across Rudbar, and constructed new fortresses at strategic points.

The rapid expansion of his territory didn’t go unnoticed, and Alamut was soon raided by the larger forces of the near¬est Saljuq amir, marking the initiation of an endless series of Saljuq-Isma‘ili military clashes.

In less than two years since the capture of Alamut, Hasan Sabbah and his followers had seized several towns across the region of Quhistan – building the foundation for an independent territorial Nizari state for the Persian Isma‘ilis in the midst of the Saljuq sultanate, for which Hasan would be the ruling Imam.

The Strategy of Assassination

In 1092CE, the Saljug launched major expeditions against the Isma‘ilis in both Rudbar and Quhistan. These skirmishes came to a sudden halt with the assassination of the Saljug Vizier Nizam al-Mulk by a Nizari fighter disguised as a Sufi mystic, followed by Sultan Malikshah’s death weeks later.

This disorder allowed Hassan to consolidate his power and the Isma‘ilis seized the strategic fortress of Lamasar (Lanbasar) to the west of Alamut and the stronghold of Girdkuh near Damgan, as well as in Arrajan, the border region between Kuzistan and Fars.

Hassan designed a strategy to decentralise the political and military power of the Saljuq sultanate. He set up a network of agents or fedāʾīs who would infiltrate the households of prominent enemy figures and assassinate them.

This strategy of killings soon became identified with the Nizari Isma‘ilis, even though it had been adopted by many before them as well as their contemporaries.

From the 12th century, Hassan began to send his own da‘i to Syria to propagate the teachings of the Nizari da‘wa. It would take almost half a century before the Syrian affiliated branch would gain a foothold and establish themselves under the leadership of Hassan’s subordinate, Rashid ad-Din Sinan.

Rashid enjoyed considerable independence from the Persian Nizari centre. Writings attribute him with a semi-divine status usually given to the Nizari Ismaili Imam and was known as the “Old Man of the Mountain” as stated by the Institute of Ismaili Studies. (Often confused in European text with Hassan-I Sabbah due to an obscure second-hand account by the explorer Marco Polo published in the Livre des merveilles du monde – Book of the Marvels of the World, also known as The Travels of Marco Polo, c. 1300).

“Mulehet is a country in which the Old Man of the Mountain dwelt in former days; and the name means “Place of the Aram.” I will tell you his whole history as related by Messer Marco Polo, who heard it from several natives of that region. The Old Man was called in their language ALOADIN.” – Marco Polo Chapter 23

“Now this Prince whom we call the Old One kept his Court in grand and noble style, and made those simple hill-folks about him believe firmly that he was a great Prophet. And when he wanted one of his Ashishin to send on any mission, he would cause that potion whereof I spoke to be given to one of the youths in the garden, and then had him carried into his Palace. – Marco Polo Chapter” 22

Rashid would play a prominent role in the regional politics of his time, orchestrating various assassination attempts and shifting alliances with Salah al-Din (Saladin), the Crusaders and other regional powers to safeguard the independence of his community.

The most notable assassination by the Syrian order was of Conrad of Monferrat, days before he was to be crowned the King of the Crusader Kingdom of Jerusalem in 1192.

During the mid-12th century the Syrian affiliated branch captured several fortresses in the Nusayriyah Mountain Range in coastal Syria, including Masyaf, Rusafa, al-Kahf, al-Qadmus, Khawabi, Sarmin, Quliya, Ulayqa, Maniqa, Abu Qubays and Jabal al-Summaq until the Mamluk sultan Baibars annexed them. From then on, the Syrian affiliated Ismailis maintained limited autonomy over those former strongholds as vassals to the Mamluks.

During the reign of the Mongol warlord Güyük Khan (1206 – 248), the Mongols plan for expansion required the conquest of the Islamic States to reach Western Asia. At this time, the Nizari Ismaili state was one such barrier that now comprised of over fifty strongholds and represented a significant obstruction to the Mongol advance.

The current Nizari Ismaili Imam Ala al-Din Muhammad joined with the Abbasid caliph, al-Mustansir, in 1238CE and appealed to the European monarchs of England and France to coalesce in a Christian-Muslim Alliance against the Mongols invaders but were declined in their support.

The first Mongol attack on the Nizari Ismailis came in April 1253 CE, when many of the Quhistani fortresses were lost to the Christian Mongol general Ket-Buqa. The Mongols eventually reached the founding stronghold of Alamut on December 15, 1256CE and besieged the castle. The Nizari Ismaili recaptured and held Alamut for a few months in 1275CE, but they were eventually crushed and their political power was lost forever.

With the fall of the Nizari Ismailis State, the remnants of the Syrian branch of Ismailis was absorbed into the territories of the Mamluk Sultan Baibars in 1273CE who continued to use their expertise in exchange for their continued existence.

The historian Yaqut al-Hamawi speculates that the Böszörmény, (Izmaleita or Ismaili/Nizari) denomination of Muslims who lived in the Kingdom of Hungary from the 10th to the 13th centuries, were employed as mercenaries by the Kings of Hungary. Dr. Ismail Balic writes in “Traces of Islam in Hungary” that, “Islam was first brought to Hungary by the Ismailites (in Izmaelitak or Boszormenyek)”.

The Institute of Ismaili Studies states that the Assassins of the Nizari Ismailis State was “Elaborated over the years, the legends culminated in Marco Polo’s account according to which the Nizari leader, described as the ‘Old Man of the Mountain’, was said to have controlled the behaviour of his devotees through the use of hashish and a secret garden of paradise. So influential were these tales that the word ‘assassin’ entered European languages as a common noun for murderer, and the Nizari Ismailis were depicted not only in popular mythology but also in Western scholarship as a sinister order of assassins”.

In popular culture, the Nizari Ismailis were arguably the inspiration for the popular video game Assassin’s Creed, which features historical fiction, science fiction and characters, intertwined with real-world historical events and figures.

Prehistoric people were farming “the world’s most dangerous bird” as early as 18,000 years ago

Prehistoric people were farming “the world’s most dangerous bird” as early as 18,000 years ago

The Sunken City of Dolichiste

By 2500 earth could be alien to humans